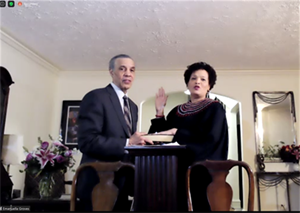 On February 9, 2021, Judge Emanuella D. Groves was sworn into the Eighth District Court of Appeals in a virtual forum over Zoom.

The pandemic did not prevent her from having the beautiful ceremony that she envisioned, despite not being able to gather in person. Hundreds of people from all around the country—family, friends, colleagues, and elected officials—joined the swearing-in ceremony to witness Judge Groves take her oath.

The ceremony included two live musical performances as well as remarks and well-wishes from several distinguished speakers and friends, including former Congresswoman (now United States Secretary of HUD) Marcia L. Fudge, who commended Judge Groves for her “zeal for justice.”  Longtime friend, Judge Larry A. Jones was Master of Ceremonies.

Judge Groves was elected to the Eighth District Court of Appeals on November 3, 2020 to fill the seat that took effect on February 11, 2021, following Judge Patricia Ann Blackmon’s retirement. Prior to being elected to the court of appeals, Judge Groves served as a municipal court judge for 18 years and an attorney for 20 years before that.

Judge Groves expressed her appreciation and gratitude to her family, friends, and numerous supporters.  She also pledged to continue her commitment to justice.

“I am convinced that you do better if you know better and the court can be a beacon to get people on track and improve their lives in our community,” Judge Groves said.   “I recognize my role as judge to be one of the checks and balances created to ensure fairness for everyone who appears in court, seeking and expecting fairness and justice within the confines of the law.”