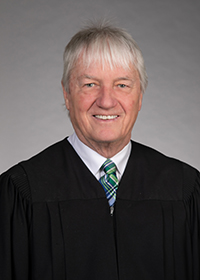 Posted January 2022
Judge Sean C. Gallagher was unanimously elected by his colleagues to serve as the Administrative Judge of the Ohio Court of Appeals, Eighth District in 2022. The Eighth District, which covers all of Cuyahoga County, is one of the largest and busiest appellate courts in the state of Ohio court system. The 12 judges of the court preside over administrative, criminal, and civil appeals emanating from the court of common pleas and its divisions: general, probate, domestic, and juvenile, as well as from the 13 municipal courts in Cuyahoga County and various administrative agencies. The court also presides over original actions, including writs for habeas corpus, mandamus, quo warranto, prohibition, and procedendo.

Judge Gallagher attended Sts. Phillip and James Grade School in Cleveland. He is a graduate of (Lakewood) St. Edward High School and received his B.A. degree from Ohio University. He earned his J.D. from Cleveland Marshall College of Law.

Judge Gallagher was elected to the Ohio Court of Appeals on November 5, 2002. Prior to his election he served as a judge in the Cleveland Municipal Court from 1997 to 2002. Judge Gallagher was a felony prosecutor in the Cuyahoga County Prosecutor’s office from 1991-1997. He served three years in the specialized “while collar” Economic Crime Unit of that office. He served four years as a Probation Officer in Cuyahoga County and was Common Pleas Court Bailiff for six years to Donald C. Nugent, now a Federal Judge on senior status in the Northern District of Ohio.

Judge Gallagher was named “Legal Eagle - Man of the Year” for St. Edward High School in 2005. He received the “President’s Award” for service with the Cuyahoga County Bar Association in 2006. He was named the Outstanding Alumnus for Cleveland-Marshall College of Law in 2007 and was named as one of the ‘Irish Legal 100’ for 2014 at the Irish Embassy in Washington D. C. that year.

In addition to Ohio, Judge Gallagher is a member of the bar in Arizona. He is married and he and his wife are the proud parents of one son. He holds dual citizenship in both the United States and the Republic of Ireland.