Eighth District Court of Appeals Judge Cornelius J. O’Sullivan, Jr., took his ceremonial oath of office on December 28, 2021, in the Rotunda of the Old Courthouse surrounded by family and friends.

Judge O’Sullivan began his term on December 17, 2021, following an appointment by Governor Mike DeWine.  Prior to accepting the appointment to the court of appeals, Judge O’Sullivan was a partner at a large litigation firm where he worked as a civil trial attorney, mediator, and arbitration chairman. 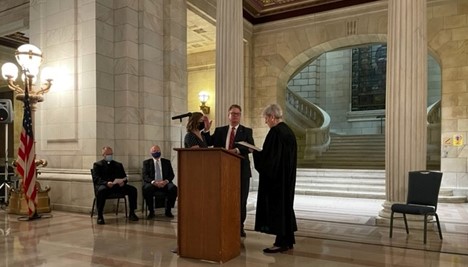 On behalf of all the judges, Administrative and Presiding Judge Sean C. Gallagher welcomed Judge O’Sullivan to the appellate bench.

In his remarks, Judge O’Sullivan thanked the many people that supported, inspired, or mentored him throughout his legal career, starting with his wife, Paula, who helped him get organized on his first day of law school.  He also commented on the amazing women role models in his life, including his mother and his five older sisters as well as trail-blazing attorneys and judges, including Judge Patricia A. Blackmon, retired.

“The greatest gift anyone can receive is the honor of wearing the Black Robe. I am so happy for you…,” stated Judge Blackmon in celebration of Judge O’Sullivan’s investiture.

Notably, Judge O’Sullivan began his legal career as a law clerk to Eighth District Court of Appeals Judge John F. Corrigan (now deceased). “When I came to work for Judge Corrigan, it was incredible—I was treated like a member of a profession by an absolute gentleman.  I am so proud to be wearing his robe and carrying his perspectives,” stated Judge O’Sullivan.

Judge O’Sullivan expressed gratitude that his four sons and two-daughter in laws were able to attend the ceremony.

Boy Scout Troop 287 led the pledge of allegiance as well as posted and retired the colors during the program.  Judge O’Sullivan, proud scout of leader of Troop 287, thanked them for their participation as well as their service in the community over the past 18 months. 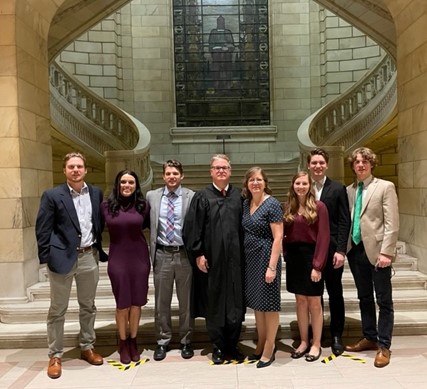