As part of the 75th Annual Franklin A. Polk Public Servants Merit Awards, Administrative and Presiding Judge Mary J. Boyle nominated David A. Shively for his service at the Eighth District Court of Appeals.

Dave joined the Court of Appeals as a Staff Attorney in 2001 and later became the fulltime Mediator in 2010.  Dave’s expertise as a mediator is well-known in the legal community, and he has mediated nearly 3,000 cases.  Notably, in addition to his service to the court, Dave has served our country in the U.S. Army Reserve, where he was selected to various staff and command positions and retired this past January after 30 years of service. 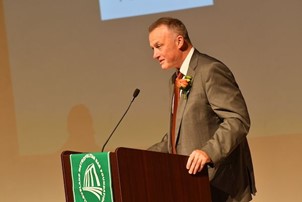 “We are lucky to have Dave at the court and the administration, judges, and court staff congratulate him on receiving this well-deserved honor,” said Administrative Judge Boyle.

This year’s award ceremony took place at the Cleveland Metropolitan Conference Center and was also live streamed and is available for viewing on YouTube: 75th Annual Franklin A. Polk Public Servants Merit Awards.