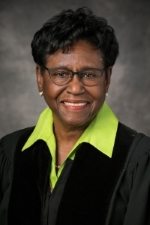 On February 10, 2021, Judge Patricia Ann Blackmon will retire from the Eighth District Court of Appeals where she has served since 1991.  Judge Blackmon was the first female African American woman elected as judge on the court of appeals in Ohio and has served five judicial terms.

Among the many honors Judge Blackmon has earned, she was inducted into the Ohio Women’s Hall of Fame, was the 1996 Alumna of the Year from Cleveland-Marshall College of Law, and was included in the 2001 “Evening of Stars - A Celebration of Educational Excellence” in a special salute to United Negro College Fund alumni. In 2017, she was inducted into Cleveland-Marshall Hall of Fame, Living Legends.  She received an honorary degree of Doctor of Laws the following year.

Judge Blackmon also teaches a winter course on The Court System for the Institute for Learning In Retirement at Baldwin Wallace University for senior citizens and a spring course on Mindfulness.

Among her other interests and affiliations, Judge Blackmon attends Pilgrim United Church of Christ; she is a member of Delta Sigma Theta Sorority, Black Women’s PAC, and the LPGA Amateur Golf League; she is Jurist-in-Residence at Cleveland-Marshall Law School.

Judge Blackmon adopted a philosophy that she followed all 30 years on the court—live in the present moment.  “You can’t go forward unless you’re in the present.  Life is a process, and we have to appreciate it in the moment.  Don’t revisit the past or worry about the future.”