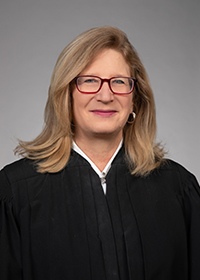 Judge Mary J. Boyle was unanimously elected by her colleagues to serve as the Administrative Judge of the Ohio Court of Appeals, Eighth District in 2020. The Eighth District, which covers all of Cuyahoga County, is one of the largest and busiest appellate courts in the state of Ohio court system. The 12 judges of the court preside over administrative, criminal, and civil appeals emanating from the court of common pleas and its divisions: general, probate, domestic, and juvenile, as well as from the 13 municipal courts in Cuyahoga County and various administrative agencies. The court also presides over original actions, including writs for habeas corpus, mandamus, quo warranto, prohibition, and procedendo.

Judge Mary J. Boyle was first elected to the Eighth District Court of Appeals in 2006 and reelected in 2012 and 2018. Judge Boyle continues to bring her passion for the law and commitment to justice to the appellate bench, where she was elected by her colleagues to serve as the court’s Administrative Judge in 2014 and  2021.

Prior to joining the appellate court, Judge Boyle served 10 years as a trial court judge in the Cuyahoga County Common Pleas Court, General Division.  Before being elected to the bench, Judge Boyle practiced as a civil litigator.  She received her law degree from the Cleveland-Marshall College of Law.