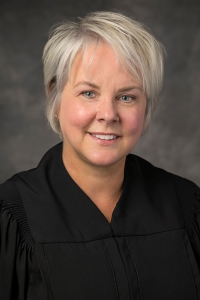 Judge Eileen T. Gallagher was unanimously elected by her colleagues to serve as the Administrative Judge of the Ohio Court of Appeals, Eighth District in 2020. The Eighth District, which covers all of Cuyahoga County, is one of the largest and busiest appellate courts in the state of Ohio court system. The 12 judges of the court preside over administrative, criminal, and civil appeals emanating from the court of common pleas and its divisions: general, probate, domestic, and juvenile, as well as from the 13 municipal courts in Cuyahoga County and various administrative agencies. The court also presides over original actions, including writs for habeas corpus, mandamus, quo warranto, prohibition, and procedendo.

Judge Eileen T. Gallagher was first elected to the Eighth District Court of Appeals in 2012 and reelected in 2018. Judge Gallagher brings her dedication and enthusiasm of the law to the reviewing bench.

Prior to joining the appellate court, Judge Gallagher served as trial judge for eight years in the Cuyahoga County Common Pleas Court, General Division. During her tenure on the bench, she served on many court and community committees. Most notably, she served as Chair of the Foreclosure Committee and was instrumental in creating a nationally recognized foreclosure mediation program.

Judge Gallagher earned a diploma in nursing from St. Vincent Charity Hospital School of Nursing, a Bachelor of Nursing degree from Ursuline College, and obtained her law degree from Cleveland-Marshall College of Law, Cleveland State University.

Since starting with the court, she has served on the following court committees: Law Review, Policy and Procedure, Personnel, Budget and Finance, and the Court Education Committee.

Judge Gallagher has been a member of various professional, civic, and community organizations. She is a presenter at various continuous education programs. Currently, she serves as a board member on the Appellate Law and Procedure Committee and the Court Administration Committee for the Ohio Judicial Conference.